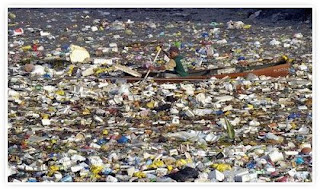 Or, If You Still Aren't Recycling Here's a DAMN GOOD REASON to Start

What is the Great Pacific Garbage Patch, you say? Well, it's a huge floating pile of trash all clobbered together in the middle of the Pacific Ocean. What is it? It's mostly plastics. Plastics like that water bottle you just threw in the trash. Plastics like that wrapper you just threw out the window. Plastics like that gallon jug you left by the creek at the camping area. It's estimated that only about 20% of the trash comes from ships. The other 80% comes from land sources, like through rivers, drainage, etc. And here's the kicker: it's big. How big, you say? It's ROUGHLY TWICE THE SIZE OF FUCKING TEXAS!

How does it stay in one general area? This article from the LA Times perhaps puts it best:

This is known as the Eastern Garbage Patch, part of a system of currents called the North Pacific subtropical gyre. Located halfway between San Francisco and Hawaii, the garbage patch is an area of slack winds and sluggish currents where flotsam collects from around the Pacific, much like foam piling up in the calm center of a hot tub.

Pretty scary, eh? And this is only the biggest patch! They exist in all the oceans all over the world!

If anyone ever needed a reason to start, and stick with, recycling this is a good one. Why aren't you recycling? Too much work, too much hassle? You have a busy life, you have lots of responsibilities, lots to see, do, learn, people to meet, etc., and you just don't have the time for it? It's not worth the effort? 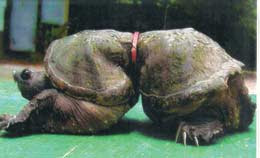 I wonder what the innocent animals who live in the water think of your rationalizations. Some animals, like this sea turtle, become trapped and deformed by the floating trash. Some ingest it and die either from starvation, suffocation or from the plastic painfully twisting their innards. Some get trapped in larger piles and simply can't get out, so they starve to death with a clear view of freedom and food. From the same LA Times article:

An estimated 1 million seabirds choke or get tangled in plastic nets or other debris every year. About 100,000 seals, sea lions, whales, dolphins, other marine mammals and sea turtles suffer the same fate.

And if that's not enough to get you off your ass consider this: the trash doesn't just hurt the animals within its immediate area.

Plastics are derived from petroleum. The heat of the sun, as well as ultraviolet rays, causes the plastics to break down into water and carbon dioxide thus adding to the problem of global climate change. While it's still floating the plastic blocks sunlight, interrupting the growth of algae, which also adds to the problem of global climate change. You see, algae eats carbon dioxide, loves the stuff. There are even experiments going on to feed iron to algae thus creating a boom in their growth and a lowering of carbon dioxide. It's not just the animals who are suffering. By refusing to recycle we are, in effect, killing ourselves.

If you aren't already recycling your plastics, numbers 1 and 2, start now! There's no time like the present! There are recycling centers all across this land and many, many larger towns and cities include recycling pickup with their regular trash service, often at no extra cost. What's stopping you? Yeah, it's a new routine but once you've gotten into it you will be amazed at how simple it is, how easy it is. Rinse things out, get rid of the lid and label and toss the item into a set aside recycling bin. Then, either put it on the curb or gather it all together every few months or so. You'll be doing your part to make sure the Garbage Patches of the world don't get any bigger. You'll make yourself feel good and you just might teach your kids something about environmental responsibility. Even if you don't give a shit about the animals of the oceans at least get to recycling for the sake of yourself, your own children and your race.
Posted by Livia Indica at 10:25 PM

I've seen this before, and it never fails to break my heart, disgust me, and make me mad. How we got to this point on this earth is just beyond me.

Very scary, yes! I was shocked when I first heard about this floating garbage--and then I still have to pick up litter every morning on my walks. I don't get it. I guess it's our job to keep spreading the word!

Hi Mrs. B.! Good to hear from you. It makes me unhappy even to think about as well, which is why it took me so long to post about it. It's just plain upsetting. Who invented plastic and what were they thinking?

It's disgusting, isn't it?

But it's more than just recycling (which I'm all for), tons of people who recycle will litter too. I just don't get that, but I've seen them do it. And that trash mass is mostly litter, from what I understand.

And the plastics put out more than just carbon dioxide when they break down, they also leach toxic chemicals into the ocean.

Just makes me so angry.

Hi Bethany. Thanks for pointing out that littering is a big part of the problem. I'm so ditzy I forgot to mention that part of it!

OMG! I have never been more glad that we recycle all of our plastics. That is so horrible. I'd like to share this with my blog readers, if you don't mind. Blessings.

It makes one wonder if anything there is from myself or yourself? Its disgusting and it is only going to get bigger!

I hsve registered in the Imagine Cup 2011, and am planning on recycling as my theme for the 60-second digital media entry. I just heard about this garbage patch, and plan on including a shot at the beginning of my entry. Perhaps this will get the word out some, as this is a world-wide competition 8-)

I've only just found out theres floating garbage in the ocean and oh my god I'm disgusted by it. Me and my family have always recycled simply because we knew it needed to be. To be honest the goverment or someone of that league should let the countries, and world, know whats happening and should provide pickups for recycling all over. Because why wouldn't anyone recycle? It's not even a matter of laziness, one step more in case to reach to another bin. To be honest I think its horrific what these poor animals are living with.

can anyone get a satellite image? It must be astonishing to see it from space. I think most people would have a different view of it then. 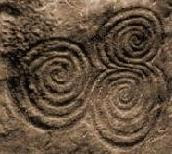